New and developing trends in the Global Economy 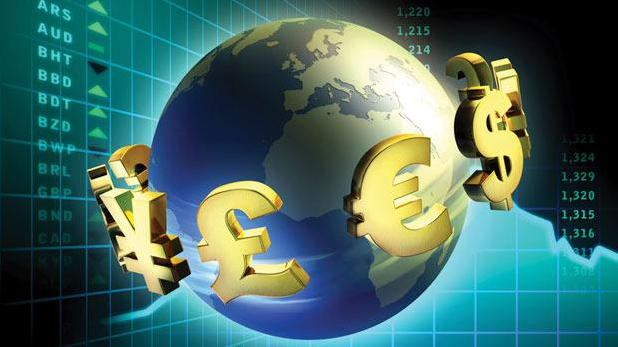 2018 has been defined by three important markers of the new and developing trends in the global economy. The rise of systemic geopolitical uncertainty, the waning of the monetary policy dominance over the economy, and the emergence of the ‘beggar-thy-neighbour’ economic policies mark the pivot toward slower growth momentum into 2019.

Whereas prior to 2018, these trends were manifested at the regional levels, spurring local financial, economic and geopolitical volatility, since the beginning of 2018, we are witnessing contagion of these factors from traditional flashing points of the Latin America, Middle East, and Eastern Pacific, to the relatively more stable centres of economic activity, namely Europe, North America, and Asia Pacific.

Around the globe, the ‘goldilocks economy’ of endless money printing and deficit financing of the last two decades is being replaced by the synchronised uncertainty of the ‘HumptyDumpty economy’. This development risks unwinding the status quo structures of the global financial order, spilling into political destabilisation, and risking triggering a major economic crisis at a global level.

The G20 summit in Buenos Aires last month was expected to produce at least three key outcomes relevant to the continuously escalating geopolitical uncertainties: the Trump-Xi dinner presented a hope for de-escalation of trade and military tensions between the world’s two largest economies; the series of Russian-European meetings were offering a prospect of a thaw in the severely strained relations between Europe’s superpowers; and the Trump-Putin meeting that held a promise of setting the stage for diffusing the historically unprecedented degree of tensions between the U.S. and Russia. Beyond these high-visibility events, the hoped-for agenda for G20 summit included other issues of structural importance, including the issues of tax policies coordination (moving beyond the OECD-led BEPS framework of tax reforms); the discussion on re-opening new trade negotiations round in the WTO (which has seen no substantive progress since 2002); and the need for continued deepening of the reforms in international institutions, such as the World Bank and the IMF, where reforms have largely stalled due to the U.S. and European intransigence on key issues. Adding to these, there is an important issue of coordinating national-level monetary, fiscal and economic policies in response to the rising risks in the global asset markets, credit flows and the threat of mercantilist trade wars, all of which are reducing global economic growth and threaten an onset of another global financial crisis.

In the end, the G20 summit delivered nothing new in the way of advancing the global policies and trade coordination. This reality stands contrasted by the role played by G20 in the wake of the 2008 Global Financial Crisis, when the organisation acted as crisis response coordination venue, supporting national and regional monetary, fiscal and development authorities in ensuring continued flow of trade and investment.

On geopolitical front, the world is a mess. U.S. military hegemony, undisputed in simple numerical terms, is being effectively checked by the asymmetric policies in the zones of hot conflicts, such as Afghanistan, Syria, Libya, and Yemen. American soft power has pivoted to hard bargains, alienating traditional allies in Pakistan, Asia-Pacific, and Latin America. The Indian Ocean is now an arena of direct competition for military dominance between China and India, just as economic cooperation between the two states is expanding. The Eastern Pacific – America’s backyard until recently – is contested by the more confrontational China, Indonesia and Japan, conflicted (between trade and political pressures) Vietnam, quasiauthoritarian Philippines, and by the gradually strengthening North Korea. Taiwan is actively building up its military deterrence arsenals, while South Korea is playing a four-players chess game with the U.S., North Korea, Russia and China. Central Asia’s recent economic drift toward China is now fuelling a fear of severe indebtedness to Beijing.

As the G20 slides into the ritualistic pageantry, the leadership-free global economy remains characterised by the elevated degree of economic policy uncertainty (CHART). 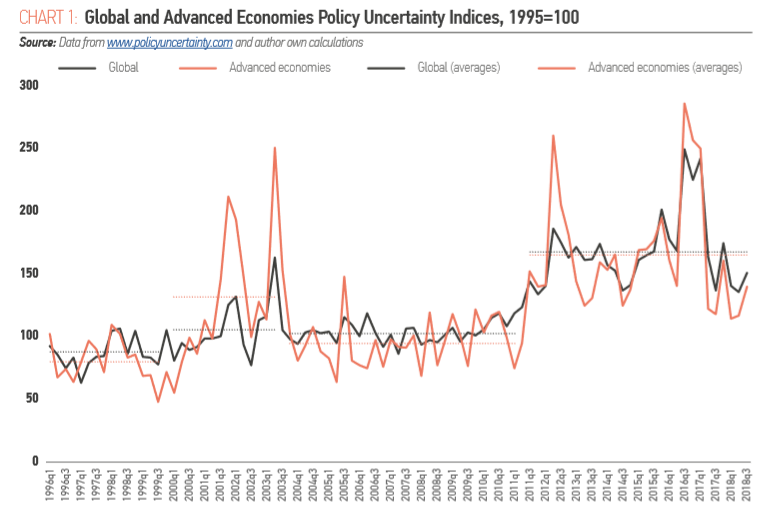 In line with the geopolitical leadership vacuum, we are witnessing the decoupling of the global economy from the decade-long paradigm of monetary expansion-driven financialization of growth. The U.S. Federal Reserve total assets peaked at just over 24 percent of GDP in 2014, falling to 20.3 percent by the end of 3Q 2018. In nominal terms, the U.S. Fed balance sheet rose to just over USD4.6 trillion by 1Q 2015, before declining to USD4.1 trillion by the end of November 2018. Roughly 90 percent of the peak-to-current drop came in the 11 months of 2018. While the markets are expecting some moderation in the pace of interest rates hikes in early 2019, the trend remains for more bloodletting on money supply side.

Mid-December 2018, the European Central Bank announced that it will be terminating its own quantitative easing program from January 2019, having slowed down the rate of assets purchases throughout 2018. As of the end of November, the ECB held EUR4.66 trillion worth of assets, amounting to 40 percent of the Euro area GDP. Despite doubling up on the U.S. levels of quantitative easing over the last decade, the ECB has managed to achieve very little in terms of structurally supporting the Euro area recovery. Per latest ECB projections, Frankfurt is lowering its growth outlook for the eurozone, and scaling back its already impressively anaemic inflation forecasts. ECB’s still aims to maintain current levels of assets held on its balance sheet well ‘beyond the interest rates increases’, currently set for H2 2019.

Globally, the above means that the current degree of leverage risk is extremely high and rising. Year after year, since 2010, the rising share of new value added in the emerging and developed economies can be attributed to increased debt levels carried by governments, companies and households. Even the recent equity boom cycle can be linked to debt financing: debt that went to fund historically unprecedented levels of shares buybacks, dividends pay-outs, and opportunistic M&As.

Not surprisingly, as of the second week of December, cash has become the King in investment markets, with the U.S. stock funds experiencing the largest outflow of funds on record (dating back to 1992), while money markets funds experiencing an even larger inflows. Currently, cash is the best performing liquid asset for the last 12 months. As I warned in these pages months ago, pivoting investors’ portfolios toward defensive cash and liquid short term bonds is a strategy that pays off at the times of extreme uncertainty.

Perhaps the only non-monetary and unlevered source of growth in recent years has been the recovery in the global trade flows since 2016. This game is now up.

While the U.S.-China trade war is one of the causes, there is an even more worrying development on foot: China’s ongoing pivot toward systemic imports-substitution policy, central to its economic reforms. Known as Made in China 2025 (MC2025), the program envisions pushing Chinese economy toward self-sustainability in technological innovation, financial services and strategically-important manufacturing sectors. The program fixes target levels for domestic producers across a range of industries. But it also aims to scale these producers to the positions of attaining international comparative advantage over their Western rivals. Based, originally, on German Industrie 4.0 program, MC2025 is vastly larger than all of its European counterexamples combined. In 2017, the state-sponsored ImportExport Bank alone had allocated USD102 billion to the MC2025related lending. Combined funding for the initiative deployed by China in 2017-2018 has already exceeded the planned total of all European Union member states innovation and technology investment supports through 2020.

The trend toward increased China-dependency in Asia-Pacific regional growth is fuelling not only the geopolitical tensions between Washington and Beijing, but also the ongoing shift in the Asia-Pacific trade growth momentum. Economic growth is following this trend. Per Focus Economics latest estimates, ASEAN economies expansion has cooled off significantly from real GDP growth of 5.3 percent (annualised) in 1H 2018, to 4Q 2018 estimated growth of 4.7 percent.

Not surprisingly, mid-December survey of economists by the Wall Street Journal revealed that 93 percent of analysts view trade wars as the number one driver of risks into 2019. Although I disagree with this prioritisation of trade conflicts over other risks, such as the prospect of a large-scale investment markets crisis and geopolitical risks acceleration, global trade flows slowdown can contribute to the VUCA (volatility, uncertainty, complexity, and ambiguity) environment in global growth.

The financial markets are signalling as much, having shifted from the ‘Goldilocks economy’ of the QE-driven policies, to a new regime of a synchronised uncertainty and coupled vulnerabilities, the ‘Humpty-Dumpty economy’. A combination of trade conflicts, intensifying stand-offs in the South China Sea and the East China Sea, growing codependencies between China and the economies of SouthEast Asia, Central Asia and Africa are fuelling a new SinoU.S. Cold War. Similar trends are taking hold in Europe (vis-à-vis the U.S., the EU and Russia), and in Latin America (vis-à-vis the U.S., Brazil, Argentina, Colombia, Venezuela, and Honduras). All of these developments are maturing just at the time when the global economy is becoming more vulnerable to exogenous shocks, such as the debt crises, and is coming under pressure from the un-winding monetary stimuli. The lack of global leadership and the declining effectiveness of international policy institutions, such as the WTO, the G20, the World Bank and the IMF, are likely to make 2019 the ‘code red’ year for the next global financial and economic crisis.

This economic outlook is provided by Dr Constantin Gurdgiev who is the Adjunct Assistant Professor of Finance with Trinity College, Dublin and serves as a co-founder and a Director of the Irish Mortgage Holders Organisation Ltd and the Chairman of Ireland Russia Business Association.

← No-Deal BREXIT: What it would mean for Ireland? (previous entry)
(next entry) The rise and rise of house prices is slowing at last →
© Copyright - Cathedral Financial Consultants Ltd<
By continuing to use the site, you agree to the use of cookies. For more information, see our Privacy Notice Accept
Privacy & Cookies Policy
Necessary Always Enabled