How do you handle friendly rivals at work? 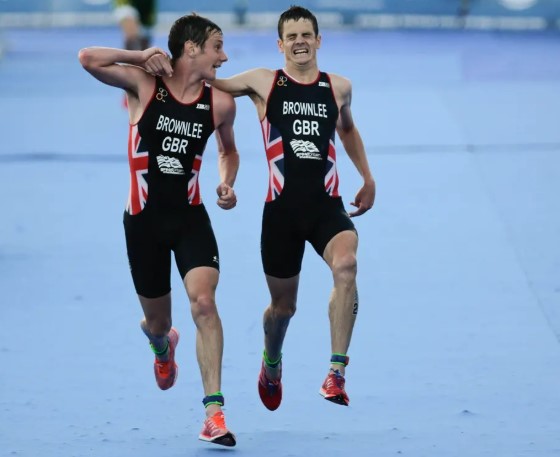 The Brownlee brothers impressed Theresa May but we could all learn something from them. The other day I met two young men from Yorkshire who have come to embody the spirit of sportsmanship and comradely teamwork. Yet the British triathlon stars, Alistair and Jonny Brownlee, turned out to be more riveting on a different matter: how to deal with a close work colleague who becomes a worrisome rival.

The brothers inadvertently shot to global fame in the gripping final moments of a big international triathlon on the Mexican island of Cozumel in 2016. In the last stretch of the race, Alistair slowed down when he saw his younger brother was staggering with exhaustion and close to collapse. He pulled Jonny’s arm over his shoulder, hauled him the last few hundred metres and pushed him over the finishing line, where Jonny did promptly collapse.

That one brief instant brought the pair more fame than the four Olympic medals they had won between them after years of hard work. Theresa May, Britain’s prime minister, later said they had in that moment “revealed an essential truth, that we succeed or fail together”.

It also revealed fresh morsels for the conference circuit. I recently saw the brothers at an event for chief financial officers in London, where they said it had been a huge advantage to have been able to train together from childhood. It wasn’t just that they were able to push each other to levels few other athletes in the world could reach. It was also supremely efficient.

Watching what did and did not work for each other meant they learnt what to do from a trusted ally faster than if they had trained independently.

Yet that trust only goes so far. In the final stage of the Rio Olympics triathlon, Jonny said he could see the pair were assured of medals and told Alistair to take it easy. But Alistair, sensing weakness, “speeds up and takes off!” said Jonny, who ended up with silver to Alistair’s gold. This prompted a question from a finance director in the audience named Richard Ellison: how did the brothers go from being trusted collaborators when training, to cut-throat rivals on the racetrack – and back again?

As Mr Ellison told me later, chief financial officers have to think about this a lot. They need the trust of senior executives to keep budgets on track, though it is possible they will end up competing with the same executives for the chief executive’s job. More than 30 per cent of group CFOs had an urge to be CEO in 2016, a global survey found.

The Brownlee brothers’ answer was pragmatism. It made sense for them to collaborate when training, said Alistair, and even in the early stages of a race. But each knew they were there to win and the gloves would come off at the end. I am not sure how far this model translates to the business world. Trust between strangers who end up working together can rarely be as strong as the bond between siblings, or couples for that matter.

Many years ago, I found myself in an awkward position when I was a newspaper correspondent in Washington. My boyfriend at the time, another journalist, took the same job at a rival paper. We were direct competitors who lived together. We had separate phones on each side of the bed. If one of us suddenly took off to the airport for a few days “on assignment”, the one left behind would joke that we hoped the other was really just having an affair, not heading out to land a tremendous scoop.

Like the Brownlee brothers, we trusted one another enough to co-operate when it made sense. We never bothered to hide news that was about to be all over the television. Yet we understood that all bets were off when it came to important exclusive stories. It worked. We are still together.

Over the years, I have seen office colleagues adopt a similar strategy, openly discussing their real or potential rivalry and then setting rules of engagement that allowed them to co-operate successfully.

More often, though, I have seen unacknowledged rivalries fester. It is risky to reveal something as sensitive as one’s ambition to anyone, let alone a competitor.

Perhaps it is a risk we should think about taking more often. Sometimes, there really is more to be gained from co-operation than there is to be lost.

← Collaboration draws on differences to reach a better outcome than working solo (previous entry)
(next entry) How to deal with sexual harassment at work? →
© Copyright - Cathedral Financial Consultants Ltd<
By continuing to use the site, you agree to the use of cookies. For more information, see our Privacy Notice Accept
Privacy & Cookies Policy
Necessary Always Enabled