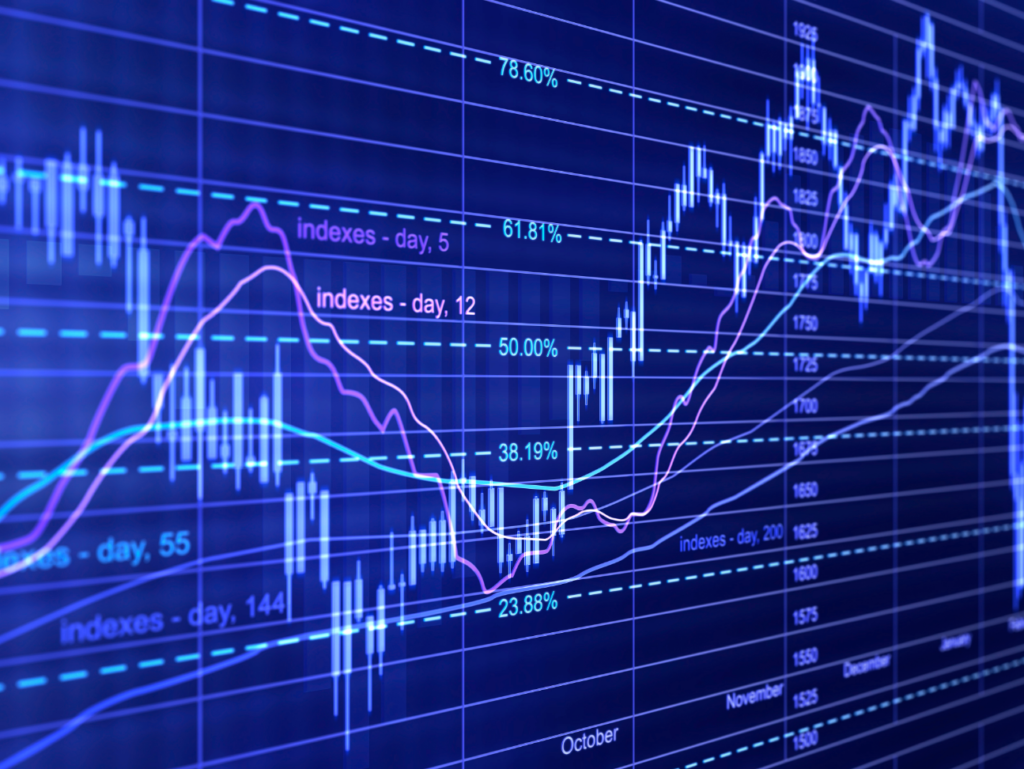 This economic outlook is provided by Dr Constantin Gurdgiev who is the Adjunct Assistant Professor of Finance with Trinity College, Dublin and serves as a co-founder and a Director of the Irish Mortgage Holders Organisation Ltd and a co-founder of iCare Housing Solutions, two non-profit organisations working with the issues of financial empowerment.

U.S. economic growth ticked lower in 2Q 2019, falling to an annual rate of 2.1 percent, a full percentage point down from a 3.1 percent in 1Q, based on the Commerce Department data. This puts the U.S. growth well below the 3 percent target set by President Trump back in late 2017 on the eve of the Republican tax cuts; a target the President repeatedly referred to since taking the office.

In reality, President Trump-supported, Congress enacted U.S. Tax Cuts and Jobs Act of 2017, known as TCJA-17, has hardly moved the needle on the U.S. growth even in 2018, when the economy expanded at 2.9 percent rate. Based on the Congressional Research Service (CRS) – a non-partisan office tasked with providing economic and policy research to the Congress – only a small faction of 2018 growth can be attributed to the TCJA-17.

In a paper published in May this year (www.everycrsreport.com/reports/R45736.html), the CRS noted:“On the whole, the growth effects tend to show a relatively small (if any) first-year effect on the economy. … Although investment grew significantly, the growth patterns for different types of assets do not appear to be consistent with the direction and size of the supply-side incentive effects one would expect from the tax changes. This potential outcome may raise questions about how much longer-run growth will result from the tax revision… From 2017 to 2018, the estimated average corporate tax rate fell from 23.4% to 12.1% and individual income taxes as a percentage of personal income fell slightly from 9.6% to 9.2%. Real wages grew more slowly than GDP: at 2.0% (adjusted by the GDP deflator) compared with 2.9% for overall real GDP.”

In other words, as the CRS research points, vast majority of the corporate tax cuts was swallowed by (in decreasing order of magnitude) shares repurchases, dividends payouts, and mergers and acquisitions. Overall, under the TCJA-17, companies repatriated some US$664 billion worth of foreign profits in 2018. They spent over US$1.1 trillion on shares buybacks alone. Shares buybacks, dividends and M&As, all of which have little to do with organic, jobs-creating and tax-paying investments, sustain continued appreciation of the share and corporate bond prices.

Chart 1 below shows that gains in the headline economic growth have failed to trickle down into uplift in wages, with the gap between real GDP growth wage inflation remaining negative, even when accounting for exceptionally low unemployment and improving paid hours of work. Since January 2018, when the TCJA-17 came into effect, median effective real wages (accounting for all three factors: wages inflation, increased hours of paid work and lower unemployment) have risen at an average annual rate of 1 percent. Over the same time, headline real GDP grew at an annual average rate of 2.5 percent.

CHART 1: Wages vs Economic Growth: The gap between real wages growth and real GDP growth, Percentage pointsSource: Author own calculations based on data from the Federal Reserve Bank of St. Louis. 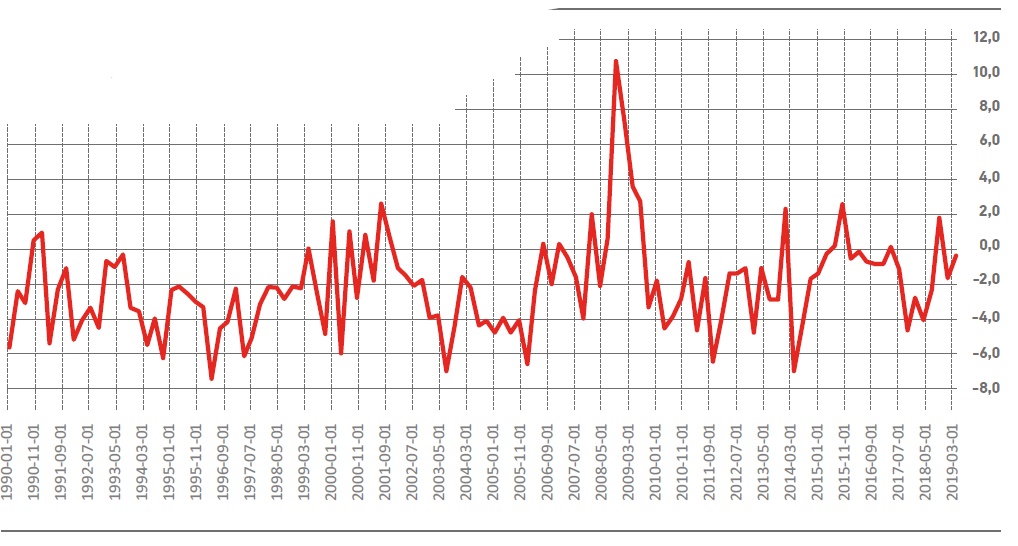 The CRS study estimates that, overall, TCJA-17 has contributed only 0.3 percentage points to nominal economic growth since 1Q 2018, well below 6.7 percent increase necessary for the cuts to be revenue-neutral. The reason for this is that TCJA-17 has had a negligible effect on household demand (a combination of household consumption and investment). Tax cuts disproportionately benefited corporate sector, while having virtually no positive uplift for either jobs creation or household incomes. Under the TCJA-17, the effective rate of corporate tax in the U.S. fell from 17.2 percent in 2017 to 8.8 percent in 2018, an improvement of 8.4 percentage points. Effective median Federal personal income tax rates have declined from 9.6 percent to 9.2 percent over the same period of time, meaning that for the first time in the U.S. modern history, personal income tax burden has now surpassed corporate tax burden.

The matters are not helped by the fact that despite record low unemployment, U.S. labour markets remain far from healthy. Civilian unemployment rate is at seasonally-adjusted 3.7 percent (lowest since 1969), and official unemployment rate for 20 years and over, at 3.3 percent (lowest since 2000). But, low unemployment, in fact, does not mean high employment. U.S. employment to population ratio, currently at 60.6 percent, is some 4.1 percentage points below its historical high recorded in 2000. Employment rate for 20 years and older population currently sits at 71.2 percent and the last three months average is at 71.1 percent. Both figures are the lowest for 1990-2008 period. Once one excludes periods of recessions. One would have to go back to 1987 to see lower levels of employment rate.

The U.S. is also near historical (considering modern period of economic development) lows in terms of people willing to work or search for jobs. Or put differently, we are at historical highs in terms of people being disillusioned with the prospect of searching for a job. U.S. Labor Force Participation rate is at 62.9 percent (62.8 percent for the last three months average). And it has been steadily falling from the peak in 1Q 2000 (at 67.3 percent).

In simple terms, the TCJA-17 failure has been much deeper than simple policy misfire. The Act failed to target properly household incomes by focusing erroneously on corporate tax cuts and tax cuts for wealthier investors and business owners. But in reality, tax cuts are no longer sufficient in generating substantive uplift in household real disposable incomes because wages inflation has been lagging real economic growth and returns on financial assets for decades. While tax policy margin for income tax cuts is extremely low already (given low median and average Federal tax burdens), the cumulated 1982-2019 gap between real wages and real GDP currently stands at 97.6 percent. Put differently, over the last 37 years, real wages have completely missed economic growth trends, leaving ordinary workers’ income far behind capital and financial assets owners’. No amount of tax cuts can undo this bleak reality. And no amount of new debt take up by consumers can compensate for this longer term deterioration in employment income.

Weaker than expected consumer demand and lack of upward momentum in household incomes – in part induced by the asymmetric, anti-household nature of the TCJA-17 provisions, but more closely related to the long-term wages-growth gap discussed above – are one set of factors holding the U.S. economy back.

The other is the Trump Administration trade policy, evident not only in the White House-led trade war with China, but also in Mr. Trump’s erratic, unpredictable and outright narcissistic approach to the U.S. trade relations with Canada, Mexico, the EU, Japan, Taiwan, Vietnam and even the Latin America U.S. client-states.

The most recent data shows that despite the unfolding currency wars favouring U.S. exporters, America’s exports are down 5.2 percent. Net trade deficit in real terms has been running at US$ 900.2 billion on average since Mr. Trump took office, and at US$943.7 billion since the start of his trade war with China. The latter figure is below the pre-2017 absolute historical low for net exports, attained in Q3 2006. In the last 8 quarters of the Obama Administration, U.S. net exports of goods and services recorded a cumulated deficit of US$6.16 trillion. Since ‘Art of the Deal’ approach took over U.S. trade policies in 2Q 2017, the same deficits rose to more than US$8.17 trillion. 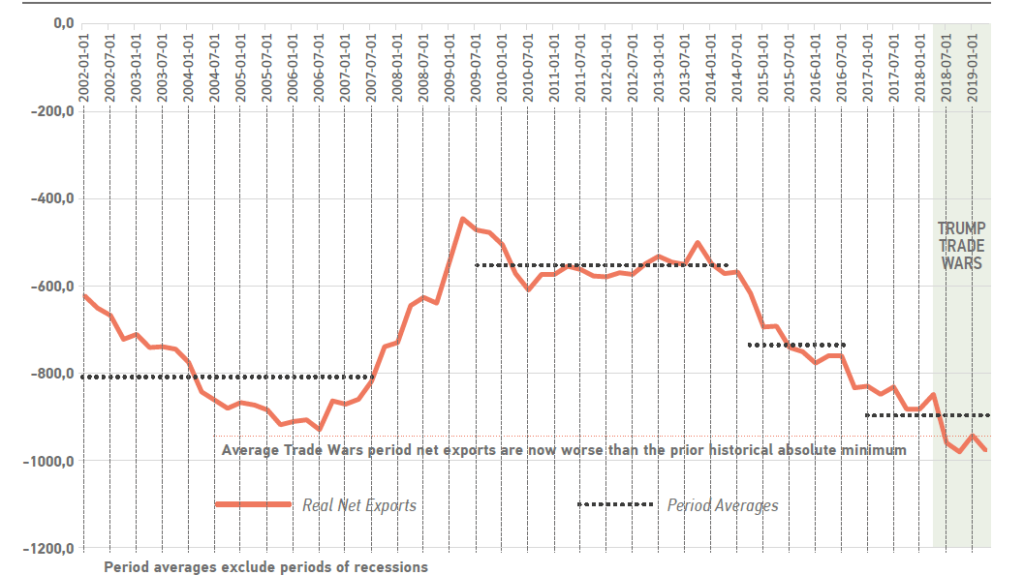 June growth report, posting a significant drop in the rate of GDP expansion rallied the stocks and boosted bond prices by fuelling investors’ expectations that the Fed is likely to cut interest rates. Over recent months, markets participants’ dramatically reversed their outlook for monetary policy in the U.S. and Europe, primarily on foot of deteriorating outlook for the advanced economies. In January 2019, consensus expectations for twelve months forward policy rates changes in the U.S. priced in two rate hikes of between 50 and 75 basis points. By March, the odds of rate hikes slipped to 0-50 basis points. At the end of June, 97 percent of markets analysts surveyed by Bloomberg and 89 percent of those surveyed by Reuters were pricing in a 50 basis points cut – a swing in monetary policy expectation of 125 basis points in just six months.

The reason for this policy psychosis is that, as outlined above, after unprecedented 11 years of economic expansion, growth in the U.S. and European economies is only starting to show positive impact on the middle and lower earners.

The last minutes from the Fed policy meetings, released at the end of June, say as much (www.federalreserve.gov/monetarypolicy/fomcminutes20190619.htm).’’Many participants noted that, since the Committee’s previous meeting, the economy appeared to have lost some momentum. …Economy-wide wage growthwas seen as being broadly consistent with modest average rates of labor productivity growth in recent years. However, a few participants noted that there were limited signs of upward pressure on wage inflation.”

All of which brings us to the investors’ broader expectations and attempting to gauge markets direction over the next few months.

Political cycle and monetary policy signalling suggest that U.S. markets are still likely to favour bulls over bears through 2019, although there is a highly elevated, and rising still, risk of a major markets correction, should the Fed continue to hold rates into October. Any such sell-off will, however, be short-lived. The swiftness with which the U.S. Congress has moved to preempt the risk of another debt ceiling debacle and endorse White House’s fiscal profligacy signals more support for the economy in late 2019 – early 2020. Even with a relatively healthy economic growth, albeit the one below the White House rosy promises, the Federal deficit has widened to $747 billion or 23 percent year on year in the first nine months of this fiscal year. The deficit is now on track to exceed US$1 trillion by the fiscal year-end. Only promise of lower interest rates and return of the Fed to Treasury’s bond sales is holding the bond markets (Chart 3). 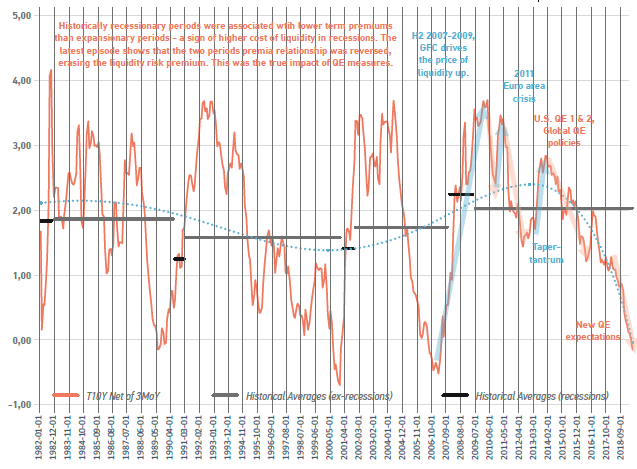 Thereafter, global economic slowdown, continued trade wars, and sustained lack of real investment growth in the U.S. corporate sector will tilt the economy toward a major growth slowdown toward the tail end of the first half of 2020.

This proposition suggests that investors should tread cautiously in the present markets when it comes to allocating new funds (staying cash and avoiding putting more money into over-bought risky assets). Defensive positioning against potential adverse shocks should involve avoiding high yield bonds and being mindful of potential liquidity risks involved in holding large positions in smaller issuers’ debt (e.g. smaller Euro area government bonds). On the other hand, more aggressive defensive investors should consider selling out of higher risk, higher yield assets while the markets for these remain strong. For funds investors, homework should involve close re-examination of funds’ core exposures. Some mutual funds and ETFs are risk-loaded with lower liquidity and higher risk exposures, especially given the last 10 years of financial markets mispricing. Once again, closing such positions and booking profits on them, constitutes a good risk positioning forward. Lastly, investors should avoid selling out of higher quality, cyclically defensive stocks and bonds that can serve as both a hedge against markets corrections and a growth opportunity after any repricing events.

← Business Briefs – Launch of 5G network, what Brexit could mean for horse racing and more.. (previous entry)
(next entry) Financial Services for Co Directors →
© Copyright - Cathedral Financial Consultants Ltd<
By continuing to use the site, you agree to the use of cookies. For more information, see our Privacy Notice Accept
Privacy & Cookies Policy
Necessary Always Enabled